These are the known issues when using SpreadsheetConverter

This page contains a list of the known issues when using SpreadsheetConverter to convert Excel spreadsheets to live, calculating web pages.

All our files and computers are scanned for malware at all stages of production using the latest versions of industry-standard Internet security software which is updated automatically. All files available from our Download page are free of known malware.

If your Internet Security software is flagging any part of our software as malicious, we urge you to contact us immediately. We are aware that e2o2.exe or ViewManager.exe sometimes get a “suspected” status, but so far these have all been false alarms.

Read more on the help page for download and installation.

As Office 365 develops more rapidly than conventional Office versions, new features are added that may be incompatible with old display drivers. This may result in apparent formatting errors.

In some systems, you may get a truncated display where some parts of the window are obviously missing or incomplete. The solution is to use the Optimize for compatibility setting described below. 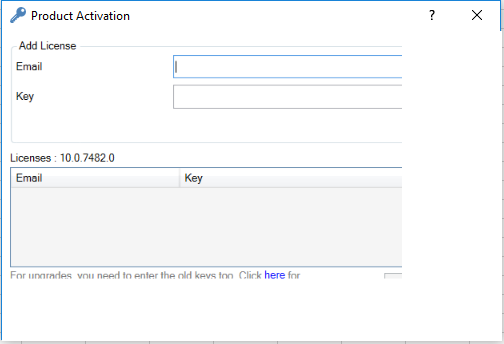 Many modern tablets and laptops have displays with much higher resolution than their predecessors. Some people refer to this as having “a high dots-per-inch ratio”, or just “high DPI”. Excel’s support for such “retina” screens is very limited, which can result in scaling issues when an Excel window is moved between monitors with different resolution. These scaling issues also affect SpreadsheetConverter. 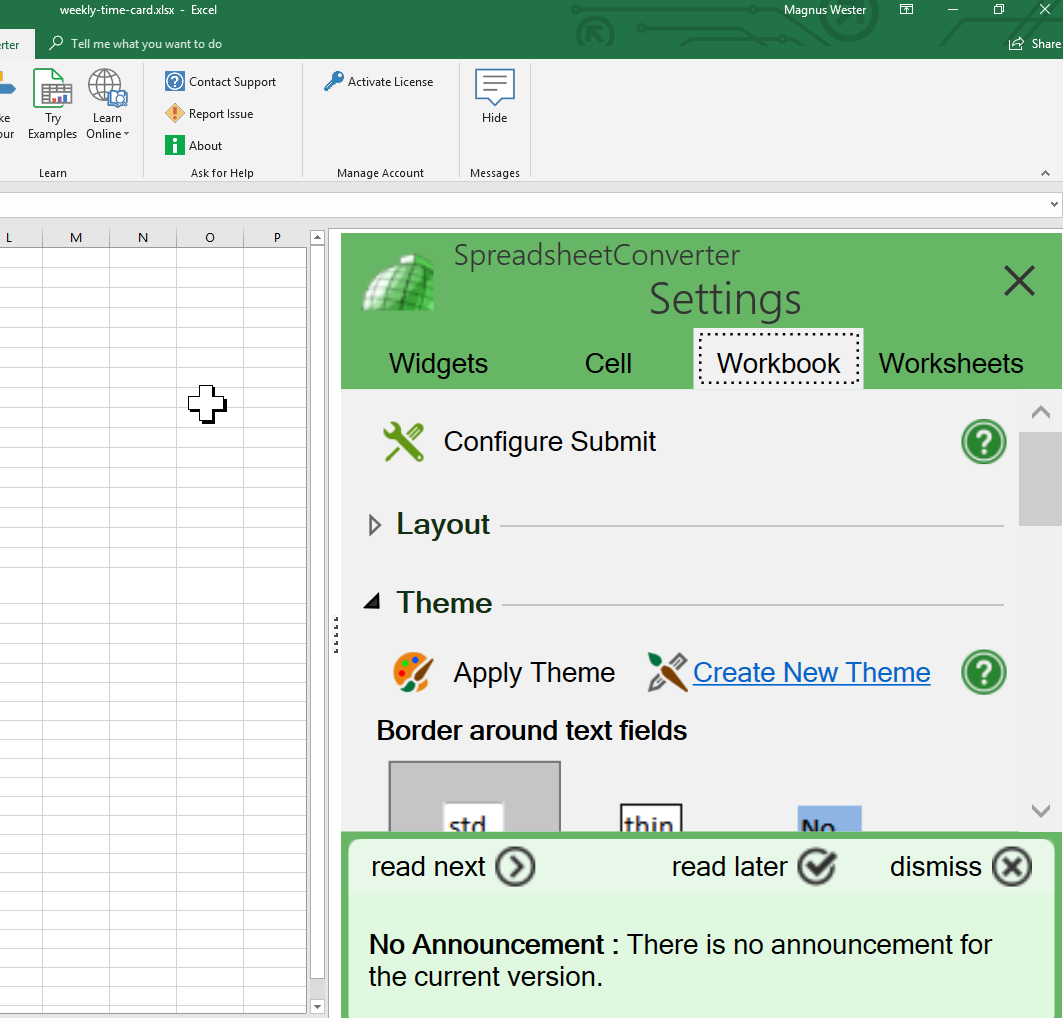 Use the setting “Optimize for compatibility”

There is a simple circumvention to these problems. In Excel, go to File > Options > General > User interface options and select Optimize for compatibility.

When using the Optimize for compatibility setting, Excel correctly handles multiple screens with different resolution. As you can see in the screenshot below, the SpreadsheetConverter task pane is now proportional to the rest of the screen. 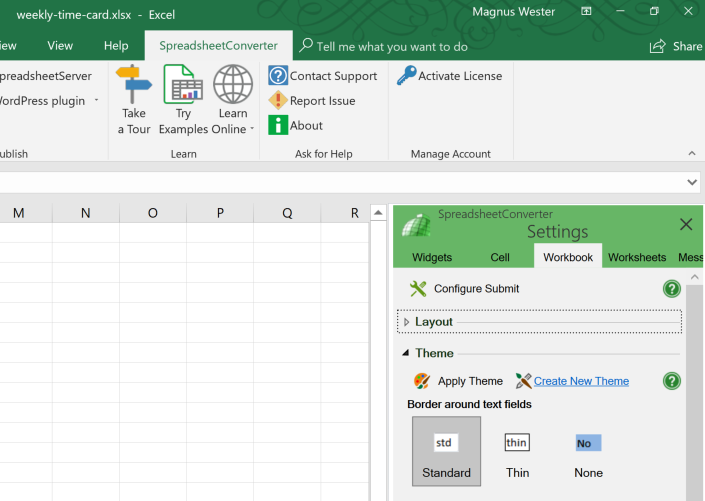 Excel does not permit add-ins like SpreadsheetConverter to control the display scaling themselves. If your version of Excel doesn’t provide the compatibility mode for multiple displays, it will not properly support multiple displays with different resolution, and you will see the scaling issues described above until you upgrade Excel.

The task pane does not work as expected

Windows 10 version 1903 introduced an error that causes the Excel task pane to stop working. The most apparent issue is that you cannot type anything into text fields in the task pane. We have developed a circumvention for this problem. If you are affected by this error in Windows you should upgrade to SpreadsheetConverter version 10.3 or later, or use a different version of Windows that doesn’t have the error.

Cells that may contain both text and numbers

When we designed SpreadsheetConverter we wanted to allow for extremely large spreadsheets, and still provide exceptionally fast response times on slow hardware. This forced us into a few minor compromises, of which one was that if you ever assign a text value to a cell, it is always treated like text.

When you reference such a cell in your spreadsheet, it always returns a text, even if it’s a number. The cell contents will always be left-aligned, also for numbers. In string comparisons the operation compares character for character from left to right, so numeric string values may give unexpected results, e.g. ‘9’ > ‘10’ and ‘09’ <> ‘9’.

Example: a formula that returns either text or a number

SpreadsheetConverter will see that the formula may return the text Error and internally defines the cell as text, which will always left-align the cell – even if it contains a number.

To avoid this from happening, divide the functionality into two cells, one with the numeric value

And another with the error indication

Example: A formula that tests if a numeric cell is empty

When you want to test if a numeric cell is empty, you would typically use a formula like

This works fine in Excel, but SpreadsheetConverter regards empty cells as text strings and so the test will fail because “” is not equal to 0. The obvious circumventions are:

If you really, really must have a cell that contains both text and numbers, an error-proof test for it being empty is

Use the correct formulas

A common problem in Excel is that it may not show you the true, entire numeric value of a cell. For example, if you enter the formula

into cell A6, it will typically display as 0.333333. But the value actually has an infinite number of threes. So the statement

will evaluate as False.

Also, most computers actually perform decimal calculations as their equivalent binary calculations. This inherent approximation may lead to differences in precision, e.g. that a cell ends up with a value of 0.45000001 when you were expecting it to contain exactly 0.45.

So, instead of the formula above, you should consider using

The same thing happens if you want to evaluate if a value is less than or greater than another value. If you get unexpected True situations using

it may be because one of the cells contains 0.45 but the other 0.45000001. To exclude this special case – where you prefer to consider the cells to be equal – use this formula instead:

If the numbers are close enough, the first part of the AND statement will not be True, and so A5 will not be considered greater than A6. You must use a “proximity constant” that is relevant for the numbers you are actually processing, in particular if you expect the cells to contain extremely high or low values.

For your spreadsheet to convert gracefully into a properly formatted web page, it must follow certain rules. We have documented these in a separate help page about the restrictions for spreadsheet file name, size and content.

Converting the spreadsheet to a web page

Empty sheets are not visible on the web page

When you convert a spreadsheet where one or more of the worksheets are empty, the empty worksheets will not appear in the converted web page.

New Google Maps may not appear as expected on your website. You get an error message saying Oops! Something went wrong. You likely have a problem with the Google Maps API key you use to show maps. Read the instructions on how to solve this. 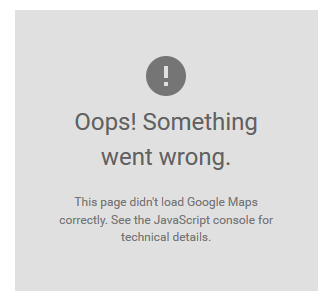 When the conversion is complete, you may be shown a QR code to scan with your mobile device. If the QR code doesn’t appear automatically, you can open the History List and scan it from there.

If the web page doesn’t appear in your mobile device when you scan the barcode, and you get messages saying the website is unavailable, impossible to connect to or doesn’t respond, you may need to add an exception to the Windows Firewall. Read more in the online help for Instant Testing.

This issue requires you to know what version of Excel you are using. This information is available on the File > Account screen. 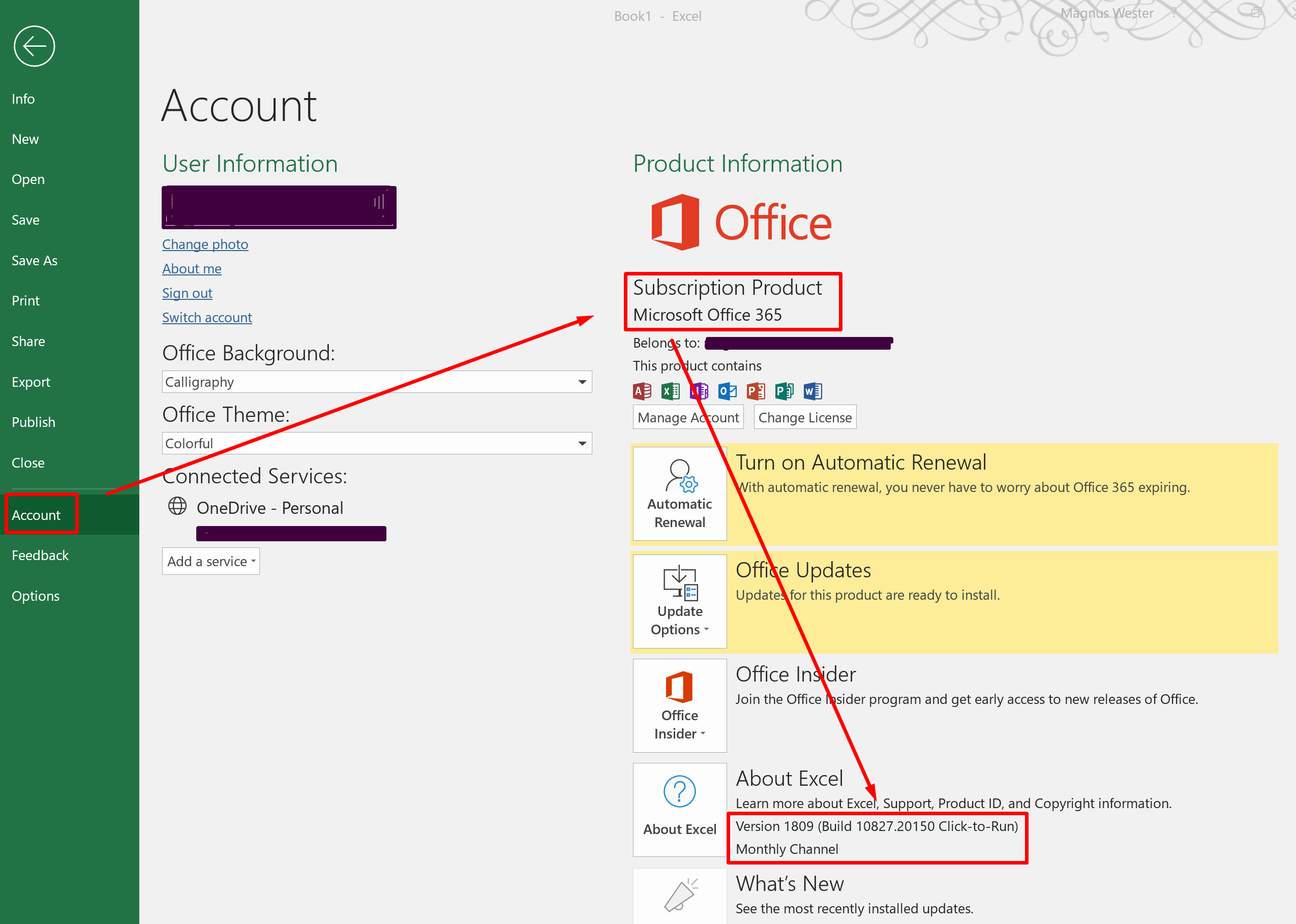 In Excel 365, version 1810, Microsoft introduced Threaded Comments. The new feature also became available in Excel 2016 version 16.17. With threaded comments, you can discuss a value or formula with other users of the same spreadsheet, just like in a chat or e-mail conversation. Notice the Reply… field in the screenshot below. 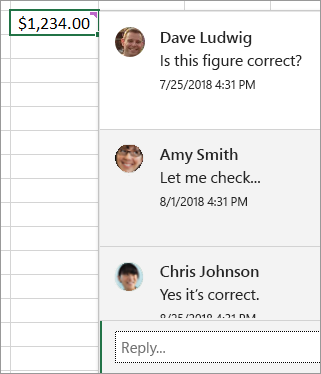 The old comments are now referred to as Notes. Notes look and work just like Comments have worked before. 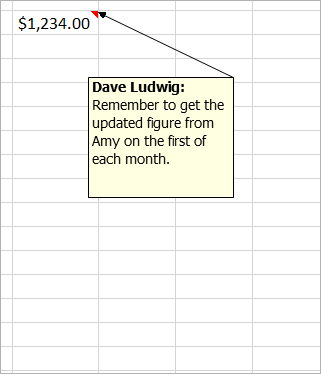 When a user with the Firefox web browser presses Submit on a form that contains a chart, and you are using the Advanced Submit Service to deliver the submitted form also in PDF format, the user may get the following error message from Firefox:

The process of preparing the PDF file is partially taking place in the browser, and on slower computers the required processing may take so long that it exceeds the built-in script time-out in Firefox. The best way to verify this is to test the form with a different web browser. If the form can be submitted without errors using a different browser, you have the situation described above.

The simplest solution is just to press Continue if the message appears after submission of a form. If the message becomes a problem you may suggest that the user reads Mozilla’s help page on how to increase the script time-out in Firefox to 20 seconds. Increasing the time-out has no negative effect except that it takes slightly longer for Firefox to detect other situations when a script has stopped responding – but this is not a common problem.

Our Free and Advanced e-mail services run on secure web servers, where incoming form submissions are saved. For each new form we receive on your behalf, we send an e-mail to one or more e-mail addresses designated by you, with the contents of the submitted form.

E-mail is built on a store-and-forward architecture, and in the worst case, an e-mail from our server may have to pass multiple servers before it reaches its recipients. The e-mail infrastructure is beyond our control and there is simply no way for us to guarantee that you will get all the e-mails we send you.

With the Advanced Submit Service, you get a personal login to our forms database. We recommend that you periodically use this login to monitor our server manually for new form submissions, in case the corresponding e-mails have been discarded by the e-mail infrastructure.

The risk of losing e-mails increases when you use File Attachments. We recommend that you use our Secure Delivery feature to have the e-mail contain just a link to the form instead of the form’s full contents with attachments.

The e-mail we send you for a submitted form uses industry-standard formatting and markup. Some e-mail clients may not provide full support for current standards. In this case, hidden sheets may be visible in the e-mail, the formatting may not be perfect etc.